How did we get here and how bad is it?

In a generation, the financing of college education has shifted from being largely state and federal tax funded to being funded by a combination of federal and private loans.

As state and federal support continued to recede, accelerated by the Recession of 2008, loans became the funding mechanism for students.  The issue has now reached a critical point as demonstrated by the following benchmarks:

The outstanding student loan debt balance has tripled over the last decade and shows no sign of retreating. 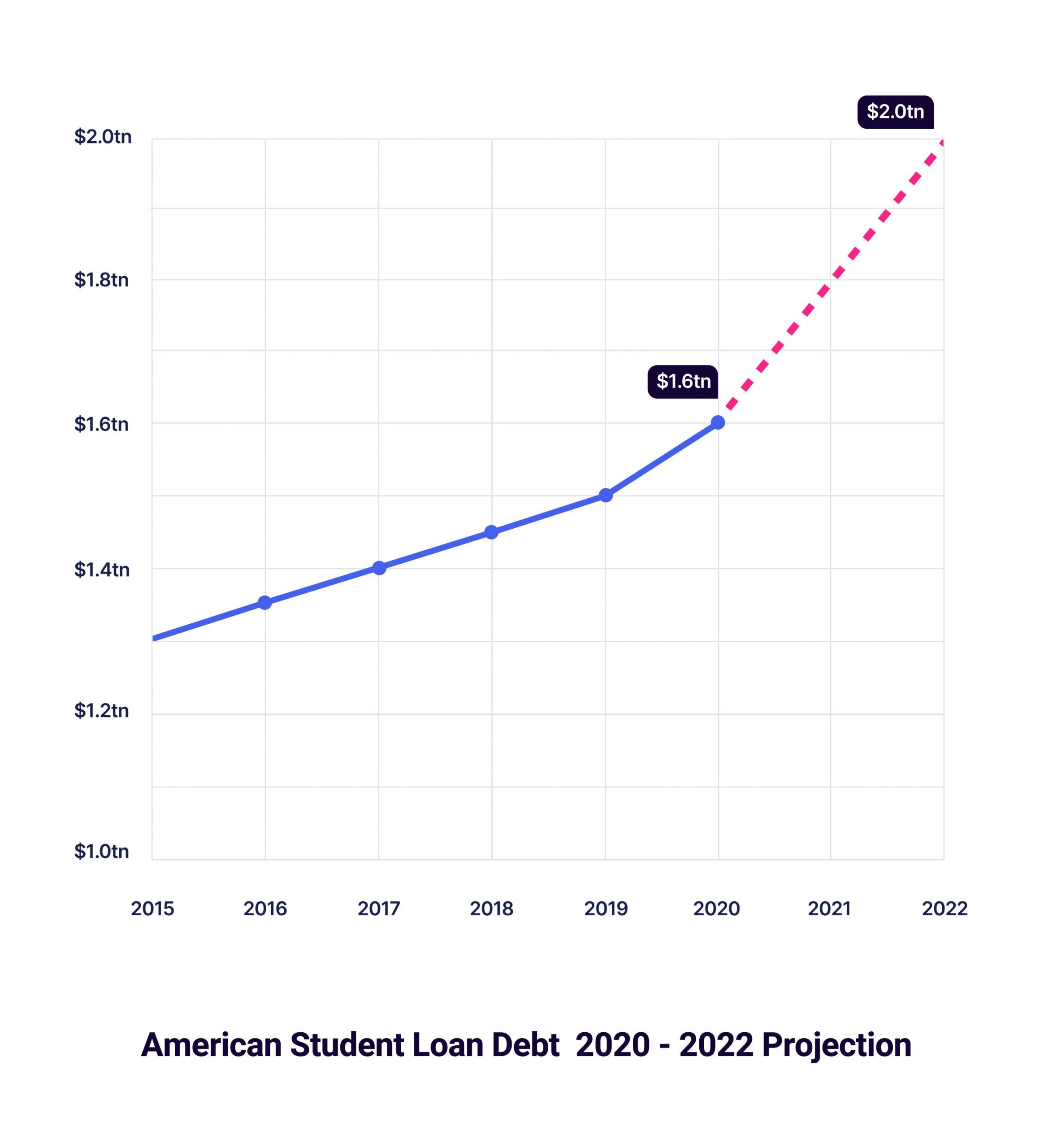 Student loan debt is now $1.6 TRILLION and is projected to reach $2 TRILLION by 2022

In 2018, the student loan program returned a gain to the federal government, but in 2019 a tipping point in the program passed, and the program began running at a deficit.  This deficit is projected to increase as 40% of student loans taken out in 2004 are expected to default by 2024 and only half of loans from 1995-1996 were paid off 20 years later; the half not paid off still owed an average of $10,000, about half of the original loan amount.  The average student loan balance today is $37,172. (Student Loan Planner.com, July 18, 2020)

The sheer size of the student loan debt has a significant impact on the economy.  Student loans are almost 11% of all installment debt, higher than auto loans and credit card debt; only exceeded by home mortgage debt.  Auto loans in default by more than three months is higher now that at the height of the 2008 financial crisis.  Auto loans are considered the “first debt” payment of choice, a bellwether indicator.  Students are hard pressed to make their loan payments as demonstrated by the US government garnishing more than $600 million from student borrower’s paychecks in 2017.

Taking money out of retirement funds early not only reduces the ability of those funds to compound, but make the total amount of funds available in retirement smaller.  The earlier funds are withdrawn, the bigger the impact.

The following younger generation cohorts took money early from their 401K savings to pay (in part) for student loans: 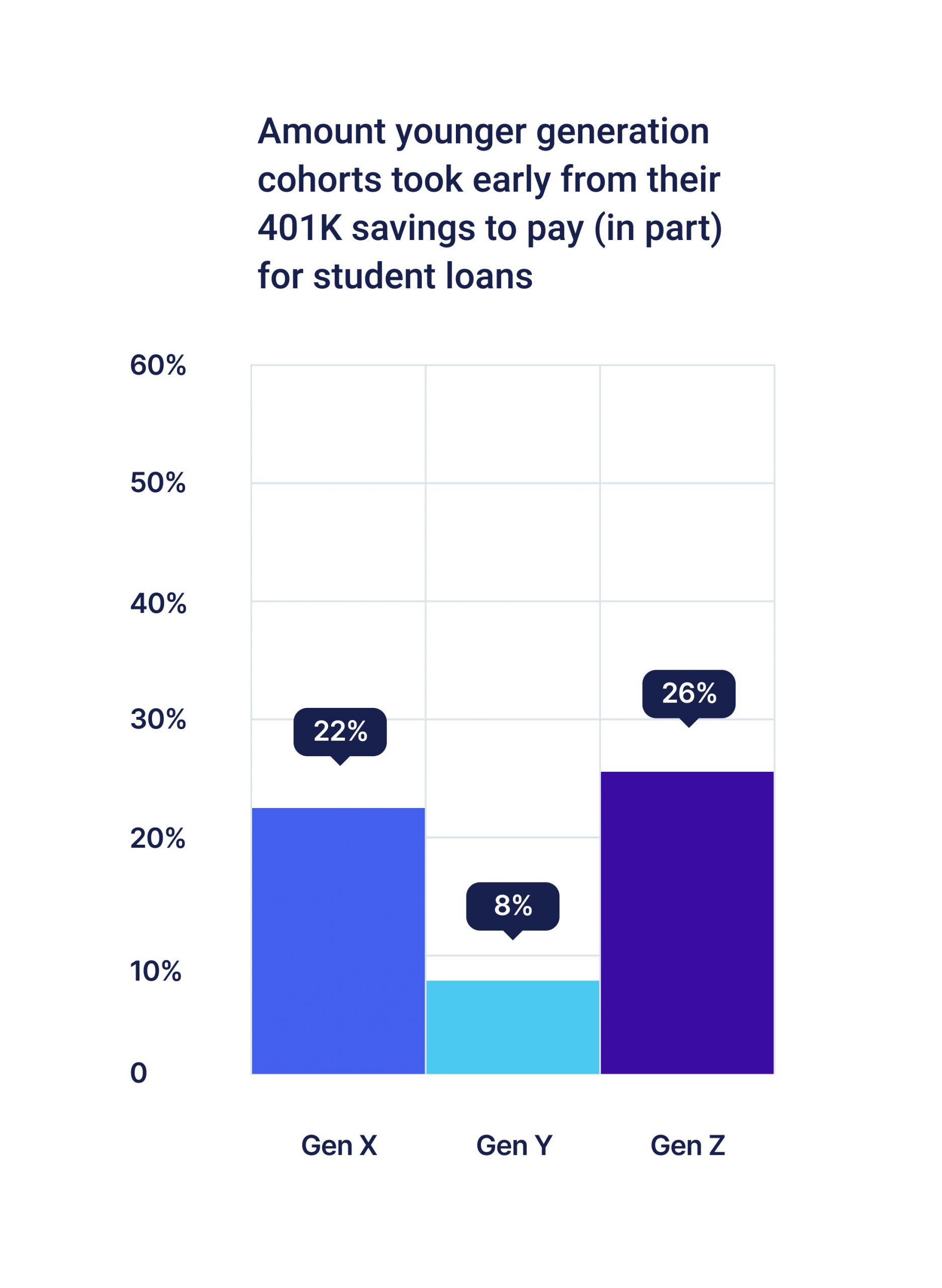 The student loan crisis has had incredible impact on the social and economic development of its loan holders. One in eight divorces are reported as directly related to student loans. Student loans are cited as causes for not purchasing new autos, homes, getting married or starting families. Between 2005 and 2014, an estimated 400,000 student loan borrowers did not buy homes. Within six years of taking on student debt, half of all debtors leave rural areas, exacerbating the rural exodus.

The multibillion-dollar scholarship program in America would seem to take some of the burden of costs of college off of the student. But scholarships do not reduce student debt for most students, they reduce grant-in-aid money given to the student and wind up benefiting the educational institution.  The student’s cost to attend college remains the same.  And, to add insult to injury, scholarship awards are treated as federal taxable income.  For all the effort students may put into winning scholarships, the net result for most is that their college education costs are unchanged, the college benefits by reducing their grant-in-aid support and the student incurs a tax liability.

Students with federal loans are eligible for a reduced loan payment program based on their disposable income.  Students fill out an annual form with their financial information and their monthly loan payment is computed to be 10% of their disposable income.  This makes the loan payment more affordable, BUT because the payment often does not cover the total of the loan principal payment and interest payment, their loan goes into reverse amortization: in other words, their loan balance grows each month instead of shrinking.

Many of these students try to enroll in the loan forgiveness program; after ten years of working for a nonprofit organization, their loan balance is forgiven.  Two problems with this solution are: one, under the current situation, successfully enrolling in the loan forgiveness program is exceedingly difficult; and two, when the loan is forgiven, the amount of that is forgiven becomes federally taxable income for the student.  So, the student is left with a large unfunded tax obligation.

The impact on older Americans is stunning, in 2008 lenders began requiring parents (or grandparents) to cosign for their child’s (or grandchild’s) loans.  This happened because the credit ability of students was insufficient to cover the increased costs of tuition, books, fees and housing. 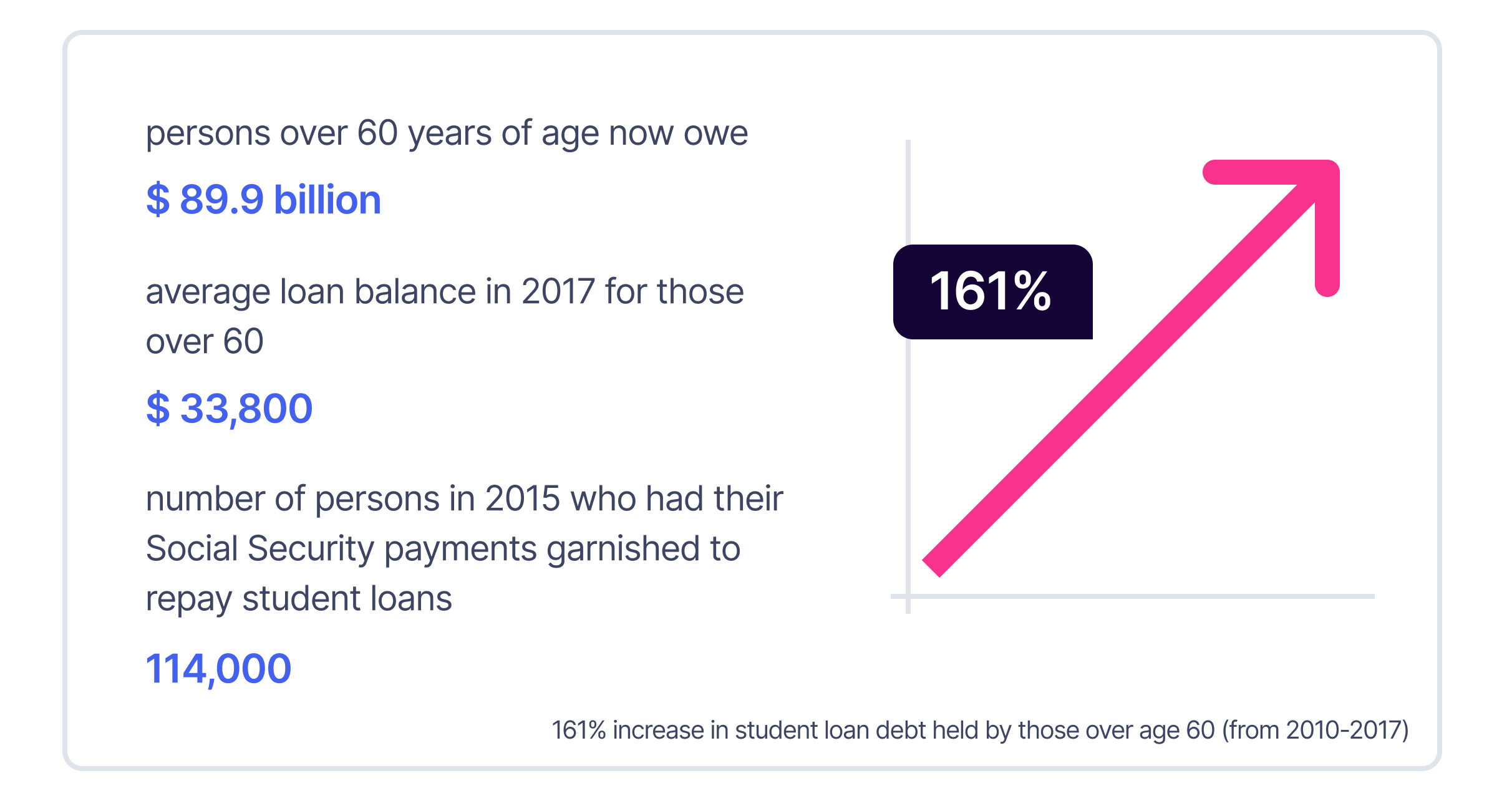